Technological Advantages of Radar and Best Practices for Optimal Performance

Since the height of the second World War, Radio Detection And Ranging (radar) technology has significantly influenced military conflicts around the globe. First introduced in the United States in 1934, this radio-based detection and tracking technology—which uses microwaves to determine the range, angle, and velocity of objects—also evolved independently in several nations during the mid-1930s, culminating in the fully integrated ship- and land-based radar systems that defined conflicts following the end of the war. Radar has since been used across a wide range of industries due to its ability to dynamically map human and vehicle movement and deliver early warnings of intruder activity. In recent years, its integration into physical security systems has improved the protection of assets at critical infrastructure locations.

Nuts and Bolts of Radar

The basic operation of a radar system involves transmitting a high-frequency electromagnetic signal towards the location of an expected target, then measuring the radiation of its reflections. Those measurements include the delay between transmitted and received energy proportional to range and the frequency shift between transmission and reception (TX and RX respectively) proportional to relative velocity, as well as the angle and angle rate available through antenna and gimbal measurements to determine to location of foreign objects.

In other words, as a radar takes a snapshot picture of the area, it learns the fixed environment. After several scans are recorded, the radar compares the most recent picture with the fixed environment and notes what is different. On the next revolution, it measures any change in the location of any abnormality, and if the difference meets one or more of the criteria for an intruder, it generates an alarm.

When integrated with sophisticated management software, the radar displays this data on a dynamic map, delivering real-time insights to any security personnel monitoring the device; it then sends coordinates to integrated cameras and initiates slew-to-cue functionality, using the cameras for visual assessment of intruders. This layering of intrusion detection sensors enables redundancy and prevents false alarms by verifying intrusion events with two data points; it also prioritizes multiple targets to provide pan-tilt-zoom (PTZ) cameras with logic, such as “follow closest” or “follow furthest,” taking the operator out of the equation and allowing personnel to focus their time on response efforts.

Pan-tilt-zoom cameras, such as the FLIR Triton PT-Series, are crucial to perimeter protection. However, the addition of radar ensures total area coverage in challenging environmental conditions.

From Military to Commercial

For years, radar was utilized primarily as a government-issued military technology for ground surveillance, missile control, fire control, air traffic control (ATC), moving target indication (MTI), weapons location, and vehicle search. The Teledyne FLIR Government and Defense unit developed the Ranger line of short-, mid-, and long-range radars for the defense industry. This powerful suite of radar systems includes devices that have the vertical coverage, low minimum detection velocity, and algorithms to monitor a coverage area up to four times per second—24/7—as well as detect and track up to 512 ground and aerial threats simultaneously in virtually any climate, day and night. These rugged and reliable radars are built to address any conceivable need for military-grade perimeter surveillance.

As the use of radar expanded into other applications such as commercial, industrial, travel, civil infrastructure, and critical infrastructure, Teledyne FLIR saw the need to add a high-performing, cost-effective solution to their vast portfolio of physical security solutions.

These commercial radars offer end users an invaluable strategic advantage: a right-sized system built to deliver high-end technical performance while increasing accessibility to broader range of commercial applications. The key differences between FLIR Ranger and Elara R-Series radars include coverage, classification, and most notably, the Elara R-Series’ use of a lower frequency and signal power output. This streamlines the integration process, making it an attractive option for customers building civilian perimeter monitoring systems.

Radar technology has been receiving increased attention across the commercial and security industries, especially in critical infrastructure. To help understand the applications radar would perform well in, please see these four use case examples where radar provides added value for perimeter protection.

As security radars see increased adoption across various industries, it is important to consider why radar could benefit your specific application. 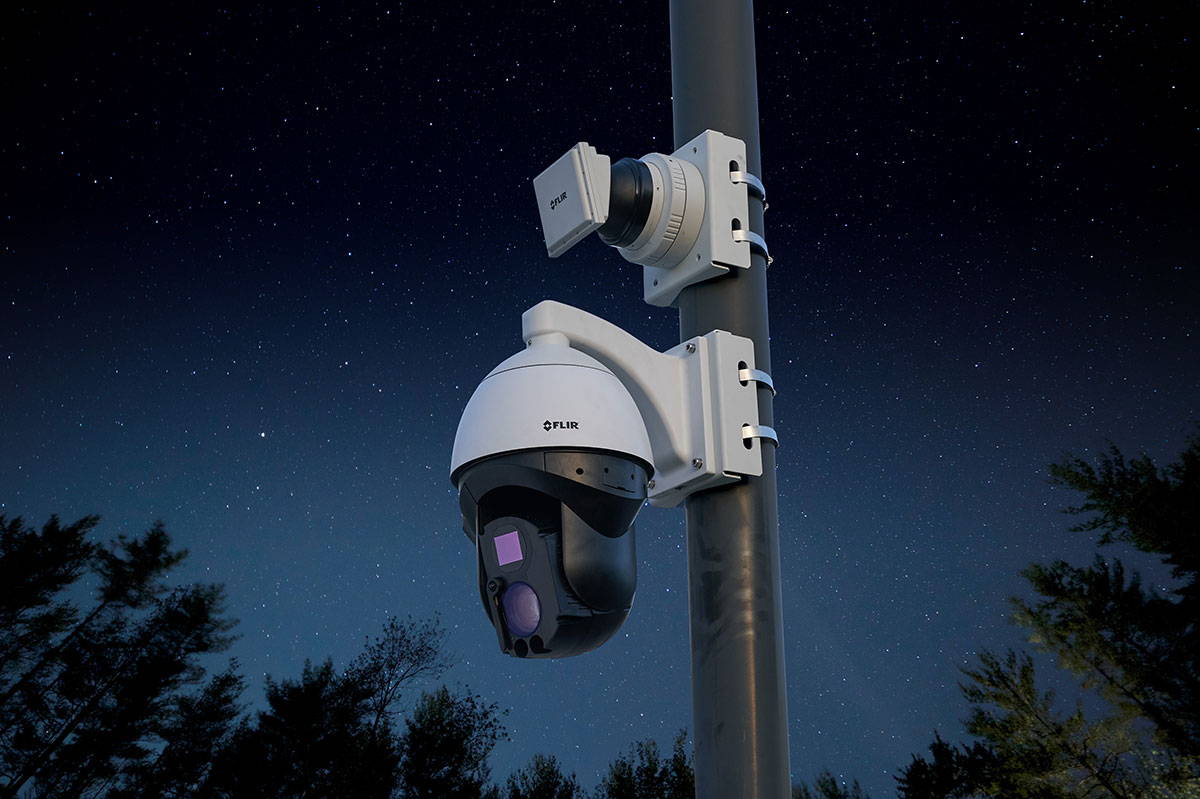 The FLIR Elara R-Series mounted above a FLIR Elara DX Multispectral PTZ Thermal Camera. The radar unit can detect vehicles up to 400 meters and humans up to 200 meters away (R-290 model).

To achieve wide area monitoring, some security customers opt for increasing the number of wide FOV cameras installed on-site. This presents its own set of challenges. Cameras with wide-angle lenses have significantly less range, reducing subsequent alarm lead times. In contrast, narrow FOV cameras offer better detection range but yield less coverage. For these reasons, a radar capable of scanning a full FOV up to 10 times per second for faster target detection is an effective option. The result is reduced infrastructure costs and early warnings of approaching threats for security operators.

Radar is also built to enhance detection accuracy and overcome the limitations of other sensors. For example, rain, heavy fog, snow, and smoke can all significantly decrease the performance of cameras, resulting in low-contrast images that decrease video analytic performance. However, radar is designed to perform in all weather conditions and is unaffected by shadows and light reflections that trigger false alerts on visual only systems. When security operators deploy radar to increase detection accuracy, they are empowered with real-time insights that enable them to keep their facility, equipment, and people safe.

When intruders are approaching a perimeter from multiple directions, delayed detection or lost visuals can severely limit an operator’s ability to intercept potential threats before they breach the perimeter. Radar is purpose-built to detect, track, and map human or vehicle movement for superior tracking of threats. It delivers continuous target tracking with distance to target accuracy within one percent. Moreover, the time from first detection to intrusion intercept is drastically improved with a radar, enabling a faster, more efficient response. In some cases, a radar detecting a human on foggy day occurs as many as 60 seconds faster than it would take a thermal camera to see the intruder in its line of sight.

A PIDS system solely relying on PTZ cameras for target tracking often requires multiple hand-offs to effectively follow a target over a large area. However, the ability for a radar to locate an intruder’s geolocation with extreme accuracy improves the entire PIDS’ capability to respond. The radar tells every integrated PTZ exactly where to aim, guaranteeing fewer hand-offs from one target tracking sensor to another and eliminating the chance of a lost visual on target. When using a radar such as the Elara R-Series, security managers can track 32 targets simultaneously and view a bird’s-eye map with overlaid masking zones, alarm areas, targets, range, and target tracks for expanded situational awareness. End users who overlap multiple radar FOVs gain uninterrupted coverage. Intelligent GPS time-stamped CHIRP slotting ensures Elara R-Series radars do not interfere with one another. The target consolidation feature helps to eliminate confusion and undesired multiple alarms, as a target inside the coverage area of overlapping radar beams will only show as a single target.

Integrating radar with multiple PTZ cameras helps to create a fail proof solution. For instance, if a camera were to lose a target due to visual obstruction or interference from poor lighting, bad weather, blinding sunlight, shadows, light reflections, etc., a radar would continue to track and deliver an intruder’s geolocation to the other PTZ cameras. In other words, by integrating radar into your PIDS, the system is far less likely to lose target’s location.

When it comes to installation, radar height, location, and tilt can all measurably impact the effectiveness of a radar within a PIDS. It is important for system integrators and end users to be aware of installation best practices to optimize radar performance. Achieving accurate and persistent localization of multiple threats at optimal ranges in all weather and light conditions comes down to accounting for every possible scenario that might limit both camera sensors and radar systems. Here are some installation pitfalls to avoid well as deployment strategies to adopt:

Radar cluttering refers to echoes or reflections not important to a radar’s function that affect its sensitivity and performance. Examples include large or nearby metal objects such as trucks, buildings, and chain link fences. Trees and brush can also absorb radar energy, decreasing its range and effectiveness.

Noise can also present a potential problem. The total signal competing with the target return—either electronic, external environmental conditions, or both—is clutter plus noise. The signal-to-noise ratio, then, compares the level of desired signal to the level of background noise, such that a ratio higher than 1:1 (greater than 0 dB) indicates more signal than noise. Installing a radar in a location where that ratio guarantees more signal than noise is the basic premise of this best practice.

An optimal installation location for any radar system is based on the line of sight to the area under surveillance. A radar’s line of sight can be interrupted by the presence of buildings, trucks, aircraft, or other large metallic objects; uncovered areas due to ground elevations; trees and brush, which in some cases are considered a seasonal factor; and grass height and density. Thus, the solution to these problems involves installation strategies that take each circumstance into account. For specific recommendations, refer to your local Teledyne FLIR sales representative. Their team of pre-sales engineers provide assistance in site survey and site design to ensure your system works well when commissioned. 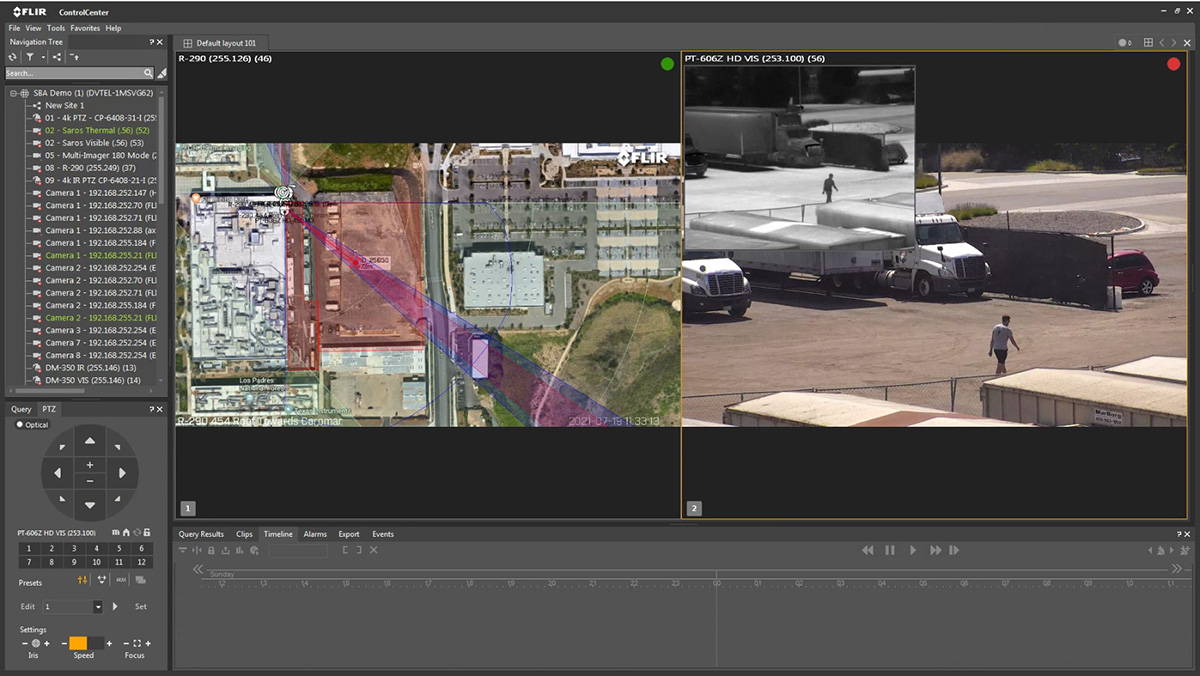 A difference in ground elevation is one of the most common pitfalls that radars face. Whether the ground is undulating, sloped, or uneven—even if a radar beam stretches across a given area—it is not guaranteed that its beam will cover every zone within that area. A combination of strategic radar height, tilt, and layering can mitigate these conditions by minimizing any clutter effect from the ground and by covering any blind spots under the radar.

Placing a radar too high, for example, will detect tall targets, while leaving the zone closest to the ground uncovered. Tilting a radar incorrectly will also reduce a radar’s sensitivity by creating ground return interference, where the beam bounces off the earth. Thus, the perfect height and tilt takes into consideration the slope of the covered area as well as the height and location of the desired detection area.

Another important strategy that leaves no zone uncovered involves a multilayered approach, wherein multiple radar beams are overlapped using different heights, or tilts if necessary, in order to provide a video management system (VMS) a variety of sensor data covering every zone within the same area. Planning an installation using a low grazing angle, for instance, with one radar and a higher or upward tilted angle with another will provide maximum coverage of the same area. System integrators can also specify a radar’s height to maximize detection of different sorts of intruders. The recommended height for security applications is three to five meters, which helps to reduce the risk of obstruction, thus yielding more range while also decreasing clutter levels.

Finally, when it comes to deploying radar for security installations, it is critical to choose a radar that integrates with your preferred VMS for ease of use and total control. Without tight integration, security operators will not be able to access or leverage the full benefits of radar, such as dynamic mapping of targets simultaneously. Logic-based target tracking, hand-off, overlapping coverage via fusion mode, and data visualization all require a radar working in concert with its VMS component.

Please complete the form below to submit your quote request.